MYTHS ABOUT SELF-PROTECTION FOR WOMEN​ 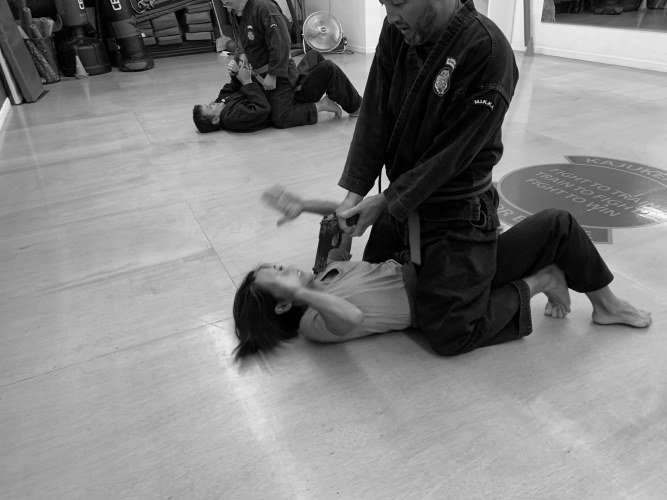 One of the key factors I try to instill in the ladies during their Wednesday night women’s self-defense classes is that if you are confronted by someone, have the mindset that they are trying to hurt you. Below, Tim Larkin provides some myths every lady in San Diego, El Cajon, La Mesa, and Santee should read.

One of the biggest problems for a woman is not that she may be smaller or weaker than a typical sociopathic criminal. The biggest obstacle is that she assumes a set of potentially life-threatening beliefs about what to do in dangerous situations.

You should reason with your attacker.
You’ve probably never pulled out a knife and demanded someone’s watch. That’s a good thing, of course, but it illustrates a vital point: Someone who would do such a thing doesn’t think like you.

Deep down, you probably believe there’s a way to resolve a problem without anyone getting hurt. Attackers aren’t playing by the same societal rules you are, so you can’t react as if they are. All you can ever really do is level the playing field.

If you’re attacked, scream for help.
You don’t have time to wait for a hero. During a truly violent encounter, you have about five seconds to act, and the safest self-defense technique to take in a violent encounter is to cause an injury. Mistakes usually come from some hesitation: pausing to see how things are going, lacking the will to really kick a man, or jumping around in a fighting stance.

These are opportunities for him to recover and hurt you. The reverse is also true if your attacker hesitates or makes a mistake, it gives you a critical moment that you must use to survive.

You need to cause pain.
In order to be 100 percent effective, we have to discard the notion of pain as a useful tool in violence. You don’t want to “hurt” him; you need to injure him. Anything you do in a violent, life-threatening situation that does not cause an injury is worthless to you.

Being fit can save your life.
No matter how fit or strong you are, the best way to hone your self-protection skills is to focus on targeting key points of the body. After that, improving your fitness level can increase the force you deliver to the targets.

You need technical self-defense skills.
Technique without injury is only a cool trick, and injury, regardless of how it occurred (with technique or by accident), will always be more effective. It’s not important how the injury happens, only that it happens. His ribs don’t know if they were broken by a boot, a stick, or a curb; they just know they’re broken. All you need is a force and a target.

Women who survive are fearless.
The first effect in any violent situation is emotion, and the most common one is fear. When a man steps in front of you holding a knife, your adrenaline starts pumping and your heart beats faster. These are reactions that can’t be avoided nor should they be.

It’s the fight-or-flight survival instinct that allows you to focus on beating your enemy or getting the hell out of there.
Many people fear they will freeze up or act irrationally. When you know how to respond, you’ll still feel a certain amount of fear that you could be hurt, or that you’re about to cause harm to another human being, but that will be tempered with confidence.

Focus on blocking his attacks.
Many self-protection classes teach you to react to an attacker’s actions. This defensive thinking can make you hesitate (“What is he going to do to me?”), lose focus (waiting to get hurt makes most people freeze), and ultimately be one step behind the attacker. In a threatening situation, don’t worry about what he’s doing; make him worry about what you’re doing.

Try to back away from your attacker.
In a life-threatening conflict, if you’re not injuring someone, you’re getting injured. Backing up or attempting to counter his “technique” with another technique (as is typically taught in self-defense classes) only gets you in more trouble: Your body is a lot better at going forward than it is going backward; for every two feet you move backward, he can move forward three feet.

Hit as often and as quickly as possible.
Punching and kicking are akin to slapping an attacker around. If you’re in danger, you need to throw all your weight into a single target, or “strike.” Imagine you’re facing a giant predator and you have a big sack full of rocks.

Throw a single rock and “ouch!” is the only reaction you’re likely to get. But swing the entire sack at him, hitting him in the head, and he’ll be out cold. That’s the difference between punching and striking.