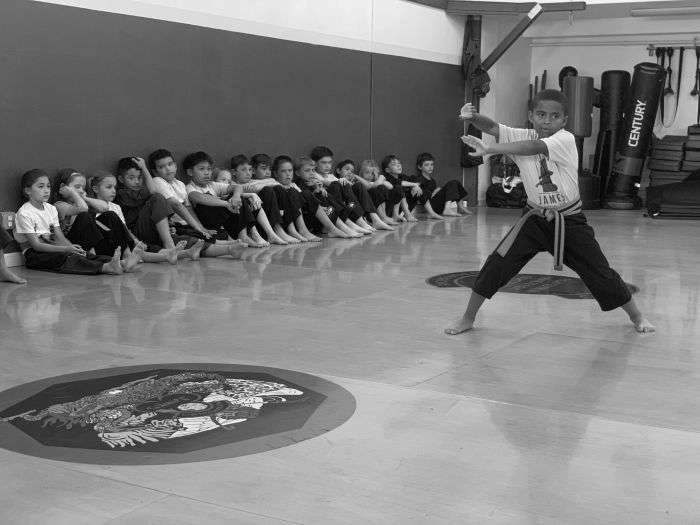 There are many martial arts in San Diego, and although, in my opinion, Kosho-Ryu and Kajukenbo are the most effective self-defense systems for protecting yourself, because both systems are multidimensional, combining highly effective and powerful striking, Jiu-Jitsu, and boxing (please read this article).

I would encourage you to come by our El Cajon martial arts studio or find a Kosho-Ryu or Kajukenbo studio near you to discover a true complete self-defense system.

This week in El Cajon, California, a man entered the home of two small children and tried to take an eight-year-old girl. Unannounced to the perpetrator, the little girl took a kung-fu San Diego self-defense class and used a technique she learned to escape. “Good for her.”

I tell my students, “I have you for 45 minutes today” and they need to stay focused because what I’m teaching them might protect them one day. My statement was verified. You never know when you might encounter a perpetrator.

My instructor Grand Master Tony Bowles told me “all martial arts are good because they were developed for the purpose to defend oneself. But there are bad teachers.”

So, now to the article below… I would like to introduce you to the Muay Thai style of martial arts in San Diego. I currently have students who have studied this form of martial arts, and full disclosure, I trained in kickboxing after college for six years and received my black belt before I found and started training in Kosho-Ryu and Kajukenbo in San Diego.

A bulk of the offending strategies that are utilized in Muay Thai use a student’s hands, feet, elbows, and knees to strike a challenger. In order to bind the opponent for both protective and offensive reasons, there is a percentage of grappling on the feet that are utilized – the clinch.

The clinch occurs when somebody enters your circle of radius, inside of your comfort zone. To carry out knees and brief kicks from the inside, the clinch can be very helpful. The Thai fighter makes great use of the clinch, binding the opponent on the feet and then pounding his stomach, ribs, knees, and legs with ruthless knees. Muay Thai knees are preferred in muay Thai, as Thai fighters invest a lot of time training their strikes-especially their knees and elbows.

Although high kicks to the opponent’s head look remarkable throughout the fights, experienced Thai fighters always say that knees and elbows have a lot more efficient, and they do the most harm to the body.

If a Thai fighter is really experienced and has enough power in his strikes, he can rapidly and quickly eliminate somebody with his methods.

In all Muay Thai techniques, two in specific have actually become incredibly popular with other styles of martial arts.

The roundhouse Thai kick is a really useful technique for both self-defense and competitors, and it is shown to be really efficient when it is performed correctly. Thai stylists perform the roundhouse kick with a straight leg and the whole body rotating out from the hip. The hip is locked shortly prior to the thrown leg making contact with the attacker. If carried out effectively, the roundhouse kick can easily render somebody unconscious.

The low kick is a common Muay Thai attack, that includes a circular motion from the stylist’s body to kick the opponent in his upper shin area. If the low kick isn’t obstructed or safeguarded, it can rapidly result at the end of a battle. After a couple of well-positioned low kicks, the challenger will not be able to put pressure on his legs due to the bruising, and will ultimately crumble.

With other martial arts styles in San Diego, such as Tae Kwon Do, stylists utilize snapping kicks that are undoubtedly faster to carry out, although they have less power. Muay Thai, on the other hand, teaches stylists to follow through with kicks, using the shin rather than the foot.

Nearly all of the methods involved in Muay Thai emphasize movement with the entire body, as do Kosho-Ryu and Kajukenbo, which suggest turning the hip each time the stylish kicks, punches, or blocks are delivered. The methods are slower, although they are far more effective than those discovered in Tae Kwon Do, Kosho-Ryu, Kajukenbo, and Karate.

As a lot of individuals already understand, the training and conditioning training discovered in Muay Thai is nothing short of famous for its strength and strenuous training. The training in Muay Thai aims to solidify the weapons used in the martial art to a high degree.

Trainees who have actually been training in Muay Thai for many years can absorb a beating, yet if they land a shin kick, it will feel as if they have actually just been hit with a sledgehammer.

All in all, Muay Thai is good martial art that teaches penalizing blows with really little grappling. Muay Thai stylists are physically strong and capable of taking a challenger out with just one well-placed strike.

Muay Thai is also among the most popular martial arts on the planet today, – which is why you might want to put it on your list of schools to visit if you are looking to study martial arts in San Diego.