KOSHO-RYU AND KAJUKENBO SELF-DEFENSE AND FIGHTING​ 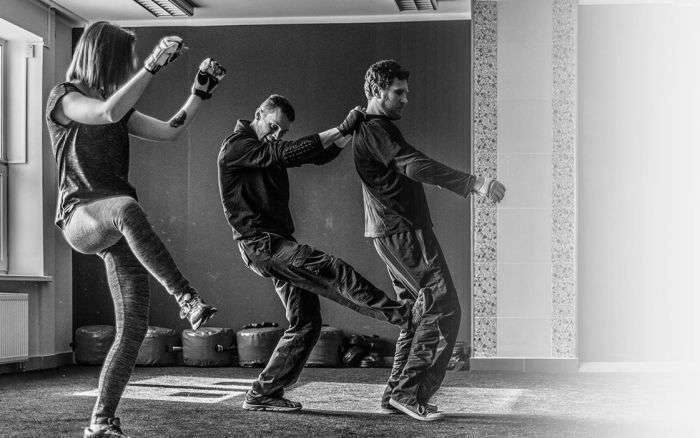 You have to know how to fight to defend yourself. However, fighting is not self-defense. That is to say, you must have fighting skills to protect yourself or someone you love if you are assaulted. This is the kind of situation that Kosho-Ryu/Kajukenbo self-defense considers in everything we do. It is not, however, the same as going out and getting into a fight.

Think about it. Suppose you are, for example, in a parking lot trying to park your car. In that case, another car cuts you off and takes the space you were going to park in. You get into an argument with the other driver, get out of your car, the argument leads to a confrontation, and you knock the other driver out. Were you defending yourself in that situation? If you are out at a bar or restaurant or school, have words with someone else, get into a fight, and send the other person to the hospital, were you defending yourself? Not really.

You are the target of a carjacking attempt. You are attacked because of your race, gender identification, religion, or other such hate-inspired motivation. You are caught in an active shooter scenario or a home invasion or sexual assault.

These are all instances in which you would be defending your life instead of utilizing fighting skills based on aggression or ego.

A mixed martial arts fight, boxing match, kickboxing fight, or grappling competition, is not intended to showcase self-defense. It’s just the opposite, it’s consensual combat, and the competitors are engaged to win a prize of some sort, be that money, a medal, an improved record, etc.

Please, make no mistake. The men and women who participate in amateur and professional martial arts-based competitions are incredible athletes who train ridiculously hard, push their bodies to become finely tuned, and are most likely very capable of defending themselves.

Training for sports fighting competitions, however, is not the same as training for self-defense. These athletes are training to put themselves into a fight. They know who they are going to fight. Depending on the weight class they will be in. What the rules of the fight are, and where the fight will take place. When the fight takes place, etc., despite the violence of the hand-to-hand combat involved, these contests are set up to be as fair as possible, and the participants are given ample time to prepare.

In terms of self-defense, the context is entirely different. The target of an assault is not consenting to engage in combat and is most often completely unaware of what will happen before an incident occurs. This is an advantage for the assailant. It is also more often than not the case that the target is selected because they are small, appear weaker, or have some other exploitable disadvantage.

Is it possible that a mixed martial arts fighter…even the best in the world…could be ambushed, attacked, and end up getting seriously injured in an assault or attack? It’s certainly possible. Their skills and training will give them tools that will help them in that scenario, but it’s certainly possible that they are capable of losing a fight outside of a cage. If that fighter has never trained on what to do if they find themselves at knifepoint or gunpoint or dealing with an attacker who is wielding a blunt object…how will they know what to do?

Fighting is a part of self-defense, but self-defense is not just fighting. There is a distinct difference in the mentality that is involved in training. At the James Martial Arts Academy, we teach and encourage students to avoid fights in any way possible, but if there is no choice, and the situation comes down to saving your own life or the life of someone you love, fight back without consideration of what is “fair” or “dirty”. Fight back to the point of neutralizing the attacker and then get away. The Kosho-Ryu and Kajukenbo self-defense systems were developed with a mindset that is about survival and getting home safe, no matter what.

This difference between fighting back and initiating leads to differences in training mentality when comparing self-defense and fighting. Some intangible skills and abilities have to be developed and kept sharp to defend yourself successfully. Athletes who compete in mixed martial arts, competitive grappling, or other sports involving fighting certainly have these skills and abilities. Still, they are trained to apply them differently.

A Kosho-Ryu/Kajukenbo student must know how to use punches, kicks, knees, and elbows to cause physical damage to someone else. Kosho-Ryu and Kajukenbo teach these techniques and reinforce them in every class, at every level. The level of technical complexity involved in striking becomes increasingly high as students progress through the system.

A baseline level of striking ability is a must to deal with any self-defense situation because Kosho-Ryu and Kajukenbo’s self-defense teaches students to use aggressive counterattacks to neutralize an attacker. The end goal is to get away from the attacker and the problem altogether. If the student can’t make powerful and aggressive counterattacks, they will not be able to prevail.

An average Kosho-Ryu/Kajukenbo student who is training for self-defense will not likely win in a sport fighting competition against a pro or even an amateur boxer or kickboxer. The point, however, is that they don’t have to win in that scenario. Kosho-Ryu/Kajukenbo students learn the same techniques as a pro and amateur fighters but are trained for a different application of those skills.

Kosho-Ryu/Kajukenbo students learn fundamental grappling techniques that apply to real-world threats like getting grabbed by the arm or wrist, getting grabbed in a bearhug, being put in a headlock, how to defend takedown attempts, how to escape from underneath someone if a fight hits the ground, and more. These fundamental skills apply to the overall philosophy and mindset of Kosho-Ryu/Kajukenbo self-defense training.

Kosho-Ryu/Kajukenbo students don’t train for a ten-minute grappling competition. There’s no focus on leg locks or learning to play a complex closed guard game. These sorts of techniques are extraordinary to see in action and take years and years of training to perfect and to make into what is an art form; they are, however, not really practical when looked at from the viewpoint of Kosho-Ryu/Kajukenbo self-defense.

Kosho-Ryu/Kajukenbo self-defense utilizes grappling and ground fighting techniques to do damage and getaway, not to get involved in a complex, drawn-out fight on the ground. It’s not counterproductive to learn and train in high-level grappling, and wrestling techniques, that sort of training will make your skillset more diverse.

Hand-to-hand combat is physically exhausting and taxing. Look at the physical condition that most mixed martial arts and sport-fighting athletes are in. They can fight for a set of predetermined periods, or rounds, over and over again. Kosho-Ryu/Kajukenbo students don’t have to be in that kind of physical shape to defend themselves successfully, but having enough endurance, again at a baseline level, will give them the ability to sustain their self-defense efforts.

Most, if not all, Kosho-Ryu/Kajukenbo certified training academies have a robust and self-defense-focused fitness program and strength and conditioning program. These classes will build your physical and mental endurance by pushing your conditioning with weight training, striking drills, high-intensity interval training, and more. One of the great advantages of Kosho-Ryu/Kajukenbo training academies is this sort of symbiotic physical and mindset training. Our purpose is to make people safer and stronger, and that is what our certified training centers are built to do.

A Kosho-Ryu/Kajukenbo student is aware of how to avoid situations where they would be forced to engage in hand-to-hand combat. Self-defense training is training to respond tactically and aggressively if “X” happens. This is because, out in the world or on the streets, if you get into a fight, it’s more than likely that someone is going to get hurt. Even if you win, you are probably going to sustain some damage. Further, fighting has consequences both legal and personal.

In that way of thinking, the idea that a Kosho-Ryu/Kajukenbo student is not going to initiate confrontation or hand-to-hand combat, the defender is always one step behind. In order to make up for this gap in timing and the sequence of events, Kosho-Ryu/Kajukenbo’s self-defense techniques involve simultaneously defending and devastating counterattacking whenever possible. Training like this, where you realize that you are reacting and defending, instills a heightened sense of awareness in students.

If you are seriously motivated to learn these sorts of skills and apply them in competition, you should be training at a gym that is cranking out amateur and pro fighters. A reputable and well-established fight training facility will have the knowledge, connections, management, and contacts needed for you to achieve your goal. Training at a flight training facility will have the same sort of positive impact on your fitness and your abilities as training at a self-defense gym. There are plenty of positives. It’s not, however, going to give you the same mentality and awareness of some situations as training for overall self-defense.

There’s no way to define which sort of training is “better” other than based on what your personal goals are.